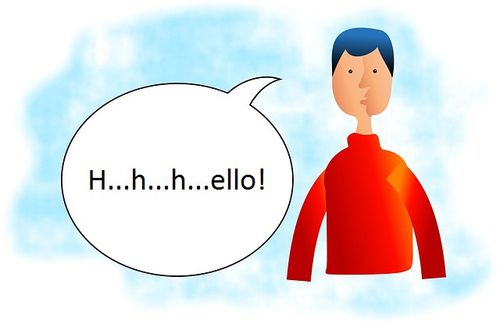 My child has a stutter but we do not talk about it… is this something we should ignore? Will my son/daughter grow out of it?

According to the National Stuttering Association (NSA), approximately 1% of the general population stutters (about 3 million people in the United States). Men are four times more likely to experience stuttering than women. “Stuttering typically starts between the ages of 2½ and 5.” Because children develop a stutter in early-childhood, diagnosis and treatment should not be delayed. “Early intervention is the most effective way to help children overcome their speaking difficulties. Therefore, it is important for parents and pediatricians to seek an evaluation by a qualified speech-language pathologist as soon as they become concerned about a child’s stuttering”.

Despite the increased knowledge we have about Stuttering, there is no reliable research-based “cure” that works for every individual affected. NSA states that, “Methods that appear to benefit some individuals may not work for others, and relapses are common.” Because Stuttering is considered a long-term condition, therapy is focused on increasing communicative effectiveness by decreasing negative behaviors/feelings associated with an individual’s speech. Strategies can be used to prevent or modify moments of stutter, which frequently helps the person to feel in control of their speech and confident in their ability to communicate with others.

So how should we talk about stuttering with our children? Should I be careful about how I am labeling or describing my child’s speech?

In an article titled, “It’s Okay To Talk To Children About Their Stuttering”, Dr. J. Scott Yauss PhD CCC-SLP BCS-F shares that “we can reassure them that trouble getting words out is just part of their learning. We can affirm for them that we are interested in what they are saying, not how they are saying it. This helps them learn to speak freely, whether or not they stutter. Speaking with confidence creates successful communication. Therefore, talking about stuttering can actually prevent the negative communicative experiences that plague older children and adults who stutter.” For children who are very young, the speech therapist may introduce stuttering as “bumpy speech”, however, this term should not be used to mask the word “stutter”. The phrase “bumpy speech” is just a way to describe what a moment of stutter feels and sounds like.

A study was conducted in 1939 to determine if labeling a child with a stutter heightens their stutter or their risk of developing a stutter. This study, entitled the Monster Study, collected 22 children from Soldiers and Sailors Orphans’ Home. 10 of these children were diagnosed with a stutter, and further divided into 2 groups; 5 were told their speech was bad, while 5 were told they had normal speech. The remaining 12 children who did not stutter were also divided into a “normal” group and a group with bad speech. These 22 children periodically met with Johnson Tudor for 45 minute sessions, who affirmed or scolded the children regarding their speech. By the end of the study, it was concluded that the 6 children without a stutter had developed stuttering-like behaviors (less talkative, fidgeting, moving feet or arms, decreased eye contact, etc.). While these children developed a nervous or negative behavior about their speech, none of these children developed an actual stutter.

It can be concluded that while negative talk about one’s speech can create negative feelings about speech, it cannot cause a stutter. It is important to stress that acknowledging a stutter itself is not negative. However, scolding a child or embarrassing a person who stutters will likely impact their confidence and attitude towards speaking.

For more information on Stuttering, please contact your speech-language pathologist or visit westutter.org.